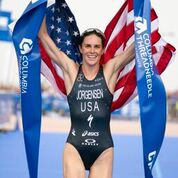 The teams from 100% Events and Triathlon NSW are excited to welcome the USA’s Gwen Jorgensen to the start line of Race 3 of the Kurnell Sprint Triathlon series on Sunday 7th February 2016!

Gwen Jorgensen is originally from Waukesha, Wisconsin, and divides her time between Australia, Basque Country, Spain and the USA under revered high performance coach, Jamie Turner.

Gwen is a 2012 Olympian, 2x World Champion (2014, 2015), and 15 x ITU World Triathlon Series race winner. She recently qualified for the 2016 US Olympic Triathlon team. She has been recognized by Inside Triathlon as one of the “10 Most Influential People in Triathlon”.

The ITU Triathlon World Cup is an annual series of triathlon races staged around the world. The race distances are 1500m swim, 40 km bike, and 10 km run. The series is organised by the International Triathlon Union (ITU), the world governing body of the sport.

Some fast facts about Gwen:

Registrations for the Kurnell race (part of the Triathlon Series) are now open. To find out more, visit www.thetriathlonseries.com.au or follow on Facebook