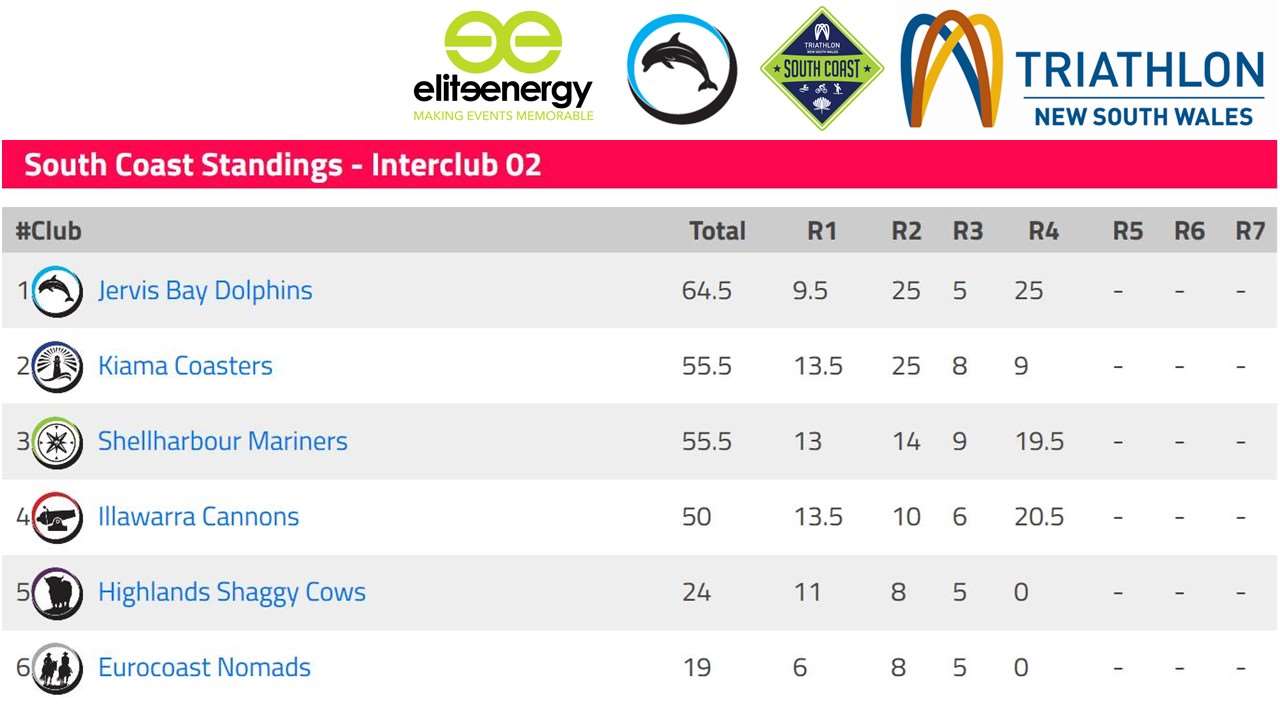 That was until this past weekend at the Callala Triathlon when the Jervis Bay Dolphins produced another spirited club performance to score their second MAX OUT of the season to take a nine- point lead into the Christmas Break.

A candidate for athlete of the season so far and Club President, Rod Rose, once again led the charge for the Dolphins with another age group victory. He wasn’t alone a top of the podium as John-Paul Hilton, Robert Duffy and Mandy Meredith also won their age groups for the Dolphins.

Kim Waterhouse, Scott Rankin and Darryl Callaghan were the other Dolphins who chipped in with Performance Points.

The Illawarra Cannons produced the best performance of the season so far to bring themselves back into the title conversation as they scored a very impressive 20.5 points to finish second. They remain fourth overall but are now just 5.5 points behind second and 14.5 off the Dolphins in first.

Sile Crowe and Kye Robinson in particular, have been in great form all season long and the continued form of both could be key to the Cannon’s success over the remaining four rounds.

The Shellharbour Mariners were third at Callala as they press on as the most consistent club in the competition this season.  They are yet to be out of the top three at any event this season and look set to be part of the title that looms at Round 8 in Forster at the Triathlon NSW Club  Championships. The recent announcement that the event will be held at Main Beach has upped the ante and will mean points will not be as easy to come by!

Rob Spicer and Tanya Fraser secured 2 Performance Point seach for the Mariners with their age group victories, with Luke Heckenberg and Zara Jobson contributing 1.5 points each as they finished second and third respectively.

The Coasters slip to second overall but are just 9 points behind with four events remaining. If they are to go back to back and claim a second South Coast Interclub title, then the Mariners, Cannons and especially the Dolphins, are going to make them work very hard for it.

The Highlands Shaggy Cows and Eurocoast Nomads didn’t trouble the scorers at Callala and remain in fifth and sixth overall. Both find themselves currently outside of the title race, but it isn’t out the question that both could drag themselves back into it.

Up next for the South Coast after a short break is Big Husky weekend which promises to be points galore for all clubs involved. The Performance Point earning race in the Long Course (Ultimate) distance.