The first NSW based commercial event of season 2022/2023 was held last Saturday 16th July delivered by Elite Energy in the country town of Goulburn. And for those who’ve waited a few years due to some COVID delays, this event delivered everything that was expected.

A rolling undulating cycle course past paddocks with cows and sheep staring blankly. A superb run along the river (out and back) with the serene sounds of waterfalls in the background. Combined with freezing cold conditions with an icy breeze blowing and temps that didn’t get into the double digits!

The Sprint Distance was dominated by the young guns of triathlon with podium positions across both male and female divisions being taken home by and a who’s who of the NSW / ACT Development Program.  Mitchell Blackbourn (Hills TC and Illawarra TC) taking out the victory, closely followed by Casper Larkin (Hills Triathlon Club) and Jack Young (Performance Triathlon Coaching). In the female Sprint Distance, it was the Panthers TC and Emerging Talent Squad star Hannah Roots who was first across the line, closely followed by Alexis Bell (Illawarra TC).

A couple of firsts occurred at the event, worthy of noting.

A superb breakout performance from Paul Taylor saw him take home the Male 40 – 44 category to win his first piece of Triathlon NSW silverware. He also proudly boosts being the very first Moore Performance Triathlon Club member to receive a NSW Individual State Championship title and his build to IM Busselton looks well and truly on track! No doubt this will be the first of many individual accolades to Triathlon NSW’s newest Eastern Suburbs based club.

History was also made with Sally Townsend being the first ever member to race for Yass Valley Triathlon Club at the Goulburn Duathlon. Yass Valley TC joined the Triathlon NSW family in only July 2022!

Not only did Sally finish 1st in her age category in the Super Sprint but she finished 6th woman overall! At 60 years old and only starting multisport (triathlon / duathlon) this year, Sally is living proof that age is no barrier to giving new sports a crack. Congratulations and welcome to you and the Yass Valley Triathlon Club! Here’s to many more events!

But it was the Standard Distance that had the most attention, doubling up as a WQE to represent Australia and the NSW Individual State Duathlon Championship across all age groups.

First across the line was Mark Arbib (Bondi Running and Triathlon Club) in an eye wateringly fast 2:14.27 to take the overall male victory and Jess Raupach who took the overall female victory in 2:23.07. This victory rounded out a huge day for the Raupach family and the Balmoral Triathlon Club, with Ken Raupach taking out the Male 60 – 64 division. The third title of the day going to Lee Brett, also from Balmoral TC taking out the Female 45 – 49.

Now that everyone is home, warm and reflective of the superb experience provided by Elite Energy, please join us in congratulations our newest champions across the following age groups. 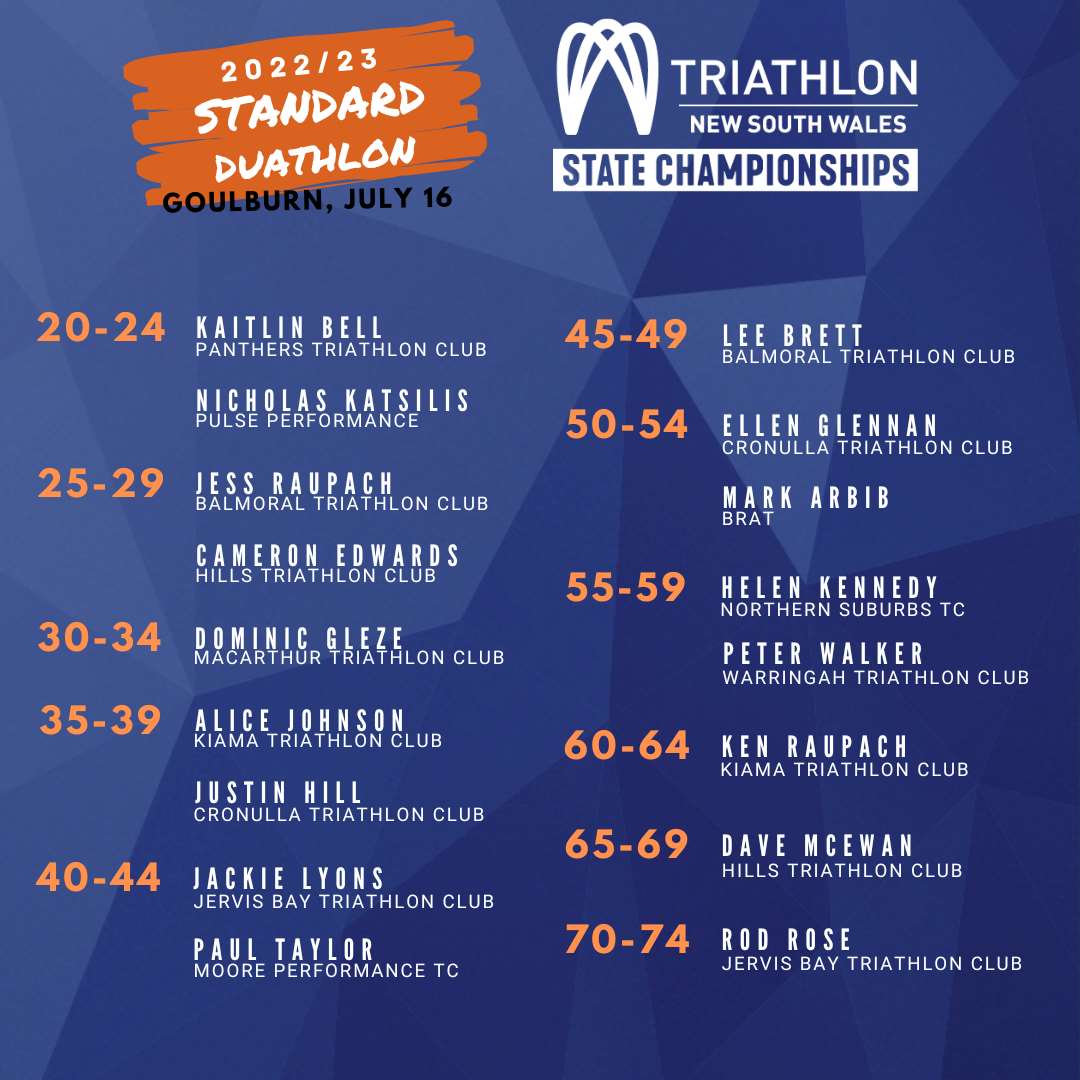 Remember, to be the NSW Individual State Champion, you have a to be the first Triathlon NSW (Standard or Premium) member across the line.

Find out where you can etch your name into eternal glory and our ‘NSW State Champ Hall of Fame’ by clicking here.