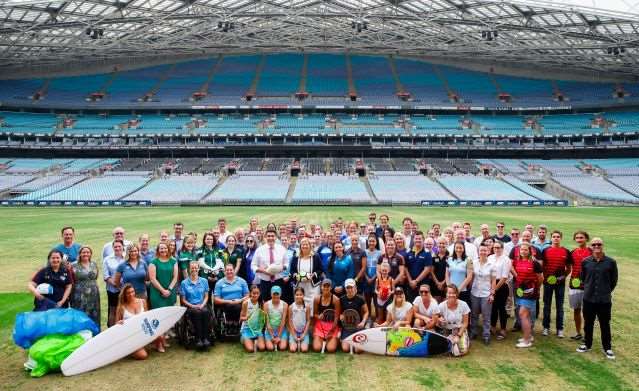 Triathlon NSW, with the support of the NSW Government, is pleased to have been awarded a substantial grant under the ‘Her Sport, Her Way’ program. This program is part of a four-year strategy to increase participation of women and girls in sport, both on and off the field, by delivering targeted initiatives through NSW state sporting organisations.

The grant program was officially launched on December 6thby the Acting Minister for Sport, Geoff Lee, and the Minister for Mental Health, Regional Youth and Women, Bronnie Taylor, at ANZ Stadium. They were supported by a number of current and former professional female athletes, including Louise Sauvage, Casey Dellacqua and Tamsin Bunt.

Triathlon NSW was represented at the event by Nicole Ward, an esteemed member of the triathlon community as both a coach and former professional triathlete, and President of the TNSW Board, Glenn Schwarzel. With her experience at all levels of the sport, Nicole was a wonderful role model for our organisation and we thank her for her attendance at the event.

As well as a media conference with the athletes in attendance, the grant launch also announced the 23 state sporting organisations in the first round of funding who have received a total of $635,000 to deliver innovative programs for women in their sports.

Triathlon NSW is excited to engage with a broader range of female participants, as our data indicates that 35% of the current membership base are female, and of these, only 5% are aged between 12-25 years. With the support of our clubs, we will be looking to address the barriers to female participation in triathlon with a state-wide project.

To find out more about the grant program, go to: https://sport.nsw.gov.au/clubs/grants/her-sport-her-way