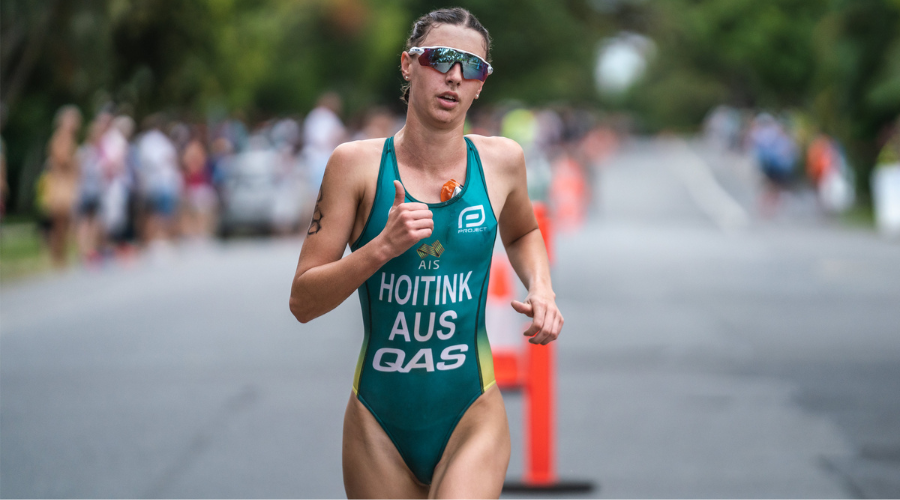 On 25th November, Ellie Hoitink will be competing in the U23 World Triathlon Championships. She qualified for this race in March at the Mooloolaba Triathlon on the Sunshine Coast. Knowing the talent in the field, Ellie had set the goal of racing with courage. After a strong swim and bike, she was in the front pack on the run. Ellie crossed the line in 5th overall but 2nd in the U23 females, securing her automatic selection to the Australian team.

Ellie’s first triathlon was a Weet-Bix Kids TRYathlon when she was 8 years old. After her dad convinced the youngster to attend a club training session, Ellie fell in love with the challenge and complexity of training for the three disciplines and has simply never looked back.

Earlier this year, along with other Australian triathletes, Ellie based herself in Europe for several months to race the international circuit. During this period, she competed in her first World Triathlon Cup in Arzachena (Italy). Having grown up watching these races, it was a surreal experience for the debutant to hear her name being introduced on the start line. Finishing in a place of 35th was an incredible effort, especially considering this race is known to be one of the most challenging courses on the World Cup circuit.

The U23 World Championships will be held in Abu Dhabi. Ellie knows the swim is her weakest leg, so her and coach Warwick Dalziel have been working on improving this area – especially for the start of the race. Attempting to replicate the course (as much as possible while training in Brisbane) has also been a priority. This will ensure that Ellie knows what needs to be done both physically and mentally during the race.

Like all elite athletes, Ellie has faced many struggles along her journey. Learning how to cope and accept setbacks and sickness is critical to being an athlete. Equally as important is developing the skills and strategies required to succeed despite difficult circumstances. However, Ellie’s most important lesson has been to trust the process and know that the hard work always pays off. This is evident with her incredible World Cup debut and qualifying for her first U23 World Championships.

Despite being a highly successful professional athlete, Ellie has proven to have impeccable time management skills by managing her intense training load and completing a double degree in Government and international relations/Law (Honours) at Griffith university. Having the flexibility to study remotely ensures Ellie can maintain her course while racing around the world. The continued support of the sport college has made it possible for Ellie to balance these two aspects of her life and ensure she remains a grounded and well-rounded individual.

For the past two seasons, Ellie has been one of our key ambassadors for Triathlon Queensland. In her role, she works with local coaches and attends sessions as part of the Sporting Schools program. Having created special memories with older and more experienced athletes as she was climbing through the ranks, Ellie always makes the time to give back to the community. This humble athlete continues to go above and beyond to support our grassroot programs.

Watch Ellie and our other Australian triathletes compete at the World Championships on TriathlonLIVE.tv