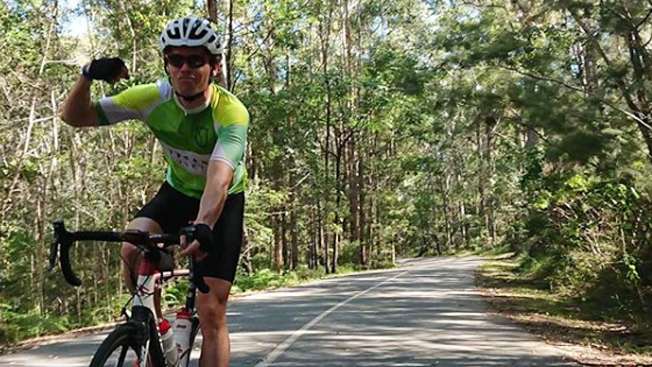 Brad Dalrymple is a well-known triathlete in the greater Brisbane triathlon community. By day, he is known as a Principal Environmental Engineer, but outside of business hours he is known as the lovable, laughing and light-hearted triathlon competitor and coach at Brisbane Triathlon Club. Brad is a five-time Queensland Triathlon Series age group winner, five-time Triathlon Queensland Nissan State Series Age Group Champion and two-time Age Group National Champion. Brad has represented Australia in three World Championships, completed two half IRONMANs, two full IRONMANs and two UltraMans. In 2015, Brad turned to the vegan diet and has not looked back.

“I came into the sport of triathlon 13 years ago with no background whatsoever in swimming, cycling or running and no idea. From extremely humble beginnings and a lot of fun along the way, I’ve managed to be lucky enough to have some great results. I certainly don’t train the hardest or the most. However, I think the way I prepare and race gives me a major advantage” says Brad.

It’s been four years since Brad went ‘vegan’ or ‘plant based’ and now he shares his journey hoping that he may motivate others to consider going vegan or at least reduce their consumption of animal products. Brad recalls, “I’m embarrassed how ignorant I was about the various benefits of going vegan, after all, I had been a health nut for as long as I can remember and had worked as an environmental engineer for over 15 years.”

Brad’s decision to change to a vegan diet was made on a long bike ride one day. After several years of racing triathlon, he felt completely burnt out and had spent months and months battling niggling injuries, particularly torn calf muscles.

“I had wanted to go vegan for a little while, as I had a niggling thought that meat consumption was essentially inconsistent with my ethical and professional position on environmental protection and conservation. I had a thought that, if I’m not going to race triathlon anymore, I should just go vegan as I’d be fine with the lethargy and poorer health, which I assumed went with being a vegan. After all, weren’t all vegans skinny hippies?

“One day while riding with a mate who has a background in nutrition, I mentioned my plans and his first comment was, awesome, you’ll be so much faster! He told me that he had been largely vegan for many years. Coming from this rather ripped and fast triathlete, it was hard to believe and completely unexpected. I decided to go vegan there and then, using myself as my own guinea pig,” says Brad.

Brad has noticed a significant improvement in his health and fitness, less injuries, recovers faster than ever before and rarely gets sick. His triathlon results significantly improved, with wins and podium finishes at some big events. Brad gained confidence to race in open/elite events and then stepped up to longer distances such as half and full IRONMAN events, before tackling the UltraMan Australia in 2017 and 2018, which includes a 10km swim, 420km bike ride and an 84km run.

“There is just no way I would have even contemplated doing this without confidence in my own health and fitness that going vegan has provided me. I’ve since spoken to many other vegan athletes, typically amateurs just like me. Everyone seems to tell the same story – improved recovery and health, feeling lighter and faster/stronger. Of most interest to me, is that the number one improvement commonly shared, is that they feel more connected and have a better understanding of the impacts of their actions on themselves, others and the environment. Like me, their only regret about going plant-based is that they didn’t do it sooner,” explains Brad.

The popularity of this diet is on the rise with many Australian professional triathletes, such as Matt Roberts, Charlotte McShane and Grace Musgrove advocating plant based diets.

Christie Johnson, an Accredited Practicing Dietitian at SportsDietitian.com and age group competitor, says “If you are following a well-planned plant-based diet, you are able to meet all of your nutrition requirements and perform well. Many of my clients have become plant-based – for health reasons, for ethical reasons and even just to see whether it would enhance their performance. Some of my clients have thrived, feeling lighter and faster like Brad, whereas others have struggled. This is where I see an assessment with a dietitian is really helpful. Nutritional deficiencies take a while to kick in, so if your diet is not well balanced, you may feel fine for a couple of months but come month four or five, you begin to feel very fatigued from nutritional deficiencies, such as iron, vitamin B12, zinc and essential fatty acids.”

“Planning is key. I take my athletes through a range of scenarios, so they can always meet their needs and fuel well. It’s the small things many people don’t think about, like working out what you can eat at work functions, when you’re travelling, or at a party. You can’t become plant-based by simply cutting out animal products from your diet, unless you are eating other foods with protein, minerals and fats. I’m lucky that I love food and cooking, so I can teach my clients how to eat well and still enjoy their food using different ingredients that match their new chosen lifestyle,” says Christie.
She suggests, “If you or your athlete have decided to go plant-based, I recommend consulting an Accredited Practicing Dietitian who understands triathlon, so their food plan can be balanced, and their health and performance aren’t impacted.”

Brad will be racing at Noosa Triathlon this weekend and a few of the Queensland Triathlon Series events, before the Tour de Froth in December, which is a bike ride from Gold Coast to Adelaide. The 3,488km charity ride will raise awareness for alternative and ethical choices over 31 days of cycling, promoting the benefits of cruelty free living. You can follow his adventures on instagram - @braddalrymple.